We’ve mentioned each point sequentially whether it’s about its problems, causes, or solutions. Just be with the article and know completely about water pollution in an essay format. 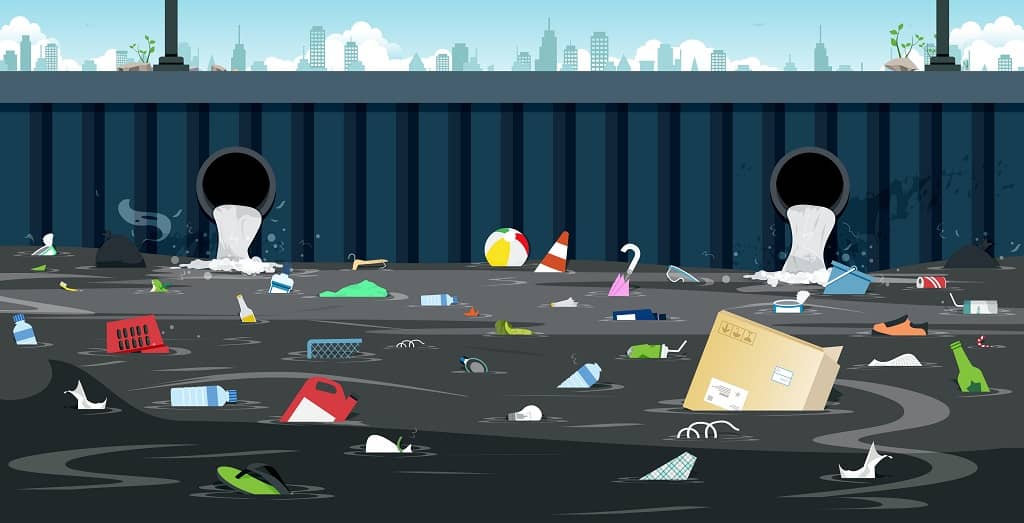 Water pollution occurs when harmful and inorganic substances make their way into a water source – it can be a river, stream, aquifer, sea, or ocean. Usually, such chemicals, harmful substances, and inorganic mass don’t stop at one place; they keep on traveling and finally stop in the sea or the ocean.

It affects marine life, humans, and other water-dependent natural elements. Such causes of water pollution are stoppable to achieve better environmental stability between humans and a different life on the planet.

You must not stop at this paragraph and keep reading to get the essential points for your speech, lesson, essay, or another purpose.

What is Water Pollution?

Humanity and all other living beings on Earth depend on water to survive. When water quality is degraded due to harmful chemicals and substances – such phenomenon is known as water pollution. It poses a significant threat to human health and the environment.

Any extra chemicals, toxic agents, waste, and inorganic materials pollute the water regardless of their effect on human health or the environment. Mainly water pollution is divided into two categories.

We won’t have a society if we destroy the environment. – Margaret Mead

The essay on water pollution goes too surprising after knowing its causes and points that help it to rise more and more. Keep reading the upcoming paragraphs to get a glimpse of the leading causes of water pollution. We have explained in separate points to enhance your reading experience and knowledge.

After the second industrial revolution of the eighteenth century, industrial waste came as extra baggage. Similarly, the major contributors to land pollution around the globe are the industries.

They pollute the water through toxic wastes, chemicals, and other dumped raw materials. Although most industrial wastes have a proper disposal system worldwide, some still don’t have a suitable waste management system.

How much waste can a single house produce in a month? Well, it is nothing compared to huge industries and corporations. But when you calculate billions of homes around the globe, then the numbers go up exponentially.

Plastic products and shopping bags are also permitted in most countries. Ultimately, this household wastage makes its way into the nearest water source.

Most countries of the world don’t have a proper waste disposal system. This poor management of waste affects household wastage and the industrial sectors.

Oil spills and oil leaks are caused mainly by accidents to ships carrying oil and offshore drillings. These factors are the primary cause of water pollution, significantly affecting marine life. It is one of the worst causes of water pollution.

There is another issue of rising sea levels concerning global warming, but that is another discussion for another day.

Humanity’s survival greatly depends on agriculture. When farmers use pesticides and other chemicals to kill crop-damaging insects and bacteria, those chemicals stay on the field.

Similarly, when it rains, the same chemicals seep into the ground polluting the groundwater and affecting humans, animals, and plants.

Moreover, in case of rain and floods, the same chemicals are dissolved into the water, and they travel to more enormous water sources, causing a surge in water pollution.

What do you think can outlive plastic? Well, the clear answer to the question is radioactive waste. Even if disposed of correctly, it can live for thousands of years.

Similarly, if a lack of responsibility occurs during its disposal, it can make its way to water and ulit8imately affect numerous lives.

What is the use of a house if you haven’t got a tolerable planet to put it on? ― Henry David Thoreau 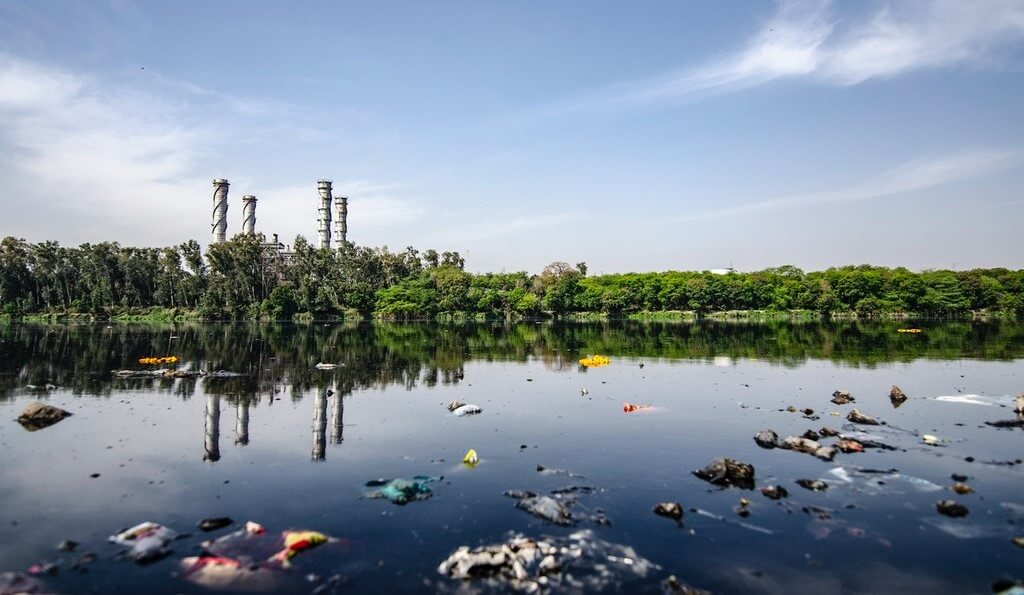 The essay on water pollution is not only for informational purposes. We should be aware of its effects in order to be serious with the problems we can face if it didn’t stop right now.

There are numerous significant effects of water pollution that directly or indirectly damage health and life around the globe. You might have read about some of them and experienced a few of them. Let us dive into this disturbing matter.

The apex-living beings of the planet earth are humans. If you observe human history closely, you will find out that whenever a disaster or pandemic came, it was because of humans’ irresponsibility.

Similar ‘who cares’ attitude has led the people to a point where even groundwater is filled with harmful chemicals. According to a WHO report in 2017, around 2.1 billion people had a poor water supply. In 2019, more than half a billion people lacked access to drinking water.

A study in 2016 showed that a person might ingest microplastics by drinking contaminated water or by consuming seafood.

Water pollution is one of the primary causes of multiple diseases. The most common conditions include Cholera and thyroid cancer.

The responsibility of protecting other life falls on humanity’s shoulders because of its status of “the most intelligent species.”

Unfortunately, they failed this task and increased the deaths of marine life due to irresponsible behavior towards water pollution.  Animals and plants cannot survive without clean water and are the most affected parties among living beings.

Another type of water pollution called nutrients pollution causes a surge in excess of algae. Algae deplete most of the oxygen from the water, thus resulting in the deaths of fishes and other creatures living in the water.

Restoring polluted water and its management is costly. For instance, Japan has more than millions of tons of contaminated water stored in tanks, and they are running out of space to keep it.

In 2011 a nuclear disaster known as Fukushima occurred in Japan known as the Fukushima disaster due to an earthquake. Experts say it could cost more than $666 billion to clean up.

Toxins and chemicals in water can destroy healthy crops. Moreover, they can also decrease the quality and growth of the crops.

Well, after knowing the causes and effects, one should know how to prevent this huge problem, which is not less than a pandemic. The real benefit of this essay on water pollution will only come to us when we will start practicing these mentioned points to avoid water pollution.

The most important discussion in this article is how to solve this increasingly alarming water pollution situation. What are some solutions that can lead to the elimination and decline of water pollution?

Whenever you buy something like a plastic item, it is better to use it again and again without replacing it. This will limit the consumption of such things, thus minimizing its chances of getting in a river, stream, or ocean.

Plastic wastes are perhaps the most common type of waste that contributes to water pollution. It is difficult to break down, and it does not decay.

Thus, avoiding plastic usage and accepting decomposable things would be beneficial for our environment.

With each passing day, chemicals like bleach, thinners, and detergents are becoming a huge problem. Even if you dump them down the toilet or drain, they become even more dangerous.

So, the solution here is to use them less and adequately dispose of them by following proper procedures.

4.  Don’t Use the Toilet as a Dustbin

Products other than toilet paper don’t break down when you throw them down the drain. They can become contributors toward more water pollution.

So, avoid throwing them in the toilet and use proper disposal methods.

In most parts of the world, there are no proper garbage disposal systems. Presently, a lot of garbage consists of plastic products that don’t decay with time.

It is better to avoid using the auto disposal system installed in the sink because the broken-down objects harm the water supply. Instead, try to use a garbage can.

Nowadays, companies are manufacturing environment-friendly chemicals. They may be a few bucks expensive, but you will contribute to better and cleaner water.

As a result, you’ll end up doing good for the environment and for your personal health too.

Never throw oily fluids down the sink, drain, or toilet. The oil doesn’t dissolve in the water and leads to endangering marine life.

The governments and oil and gas corporations must make the oil trades safer to avoid accidents or spills on water.

One of the best solutions to avoid water pollution is to use it less. When you use less water, you will be using fewer detergents, soup, and other chemical substances that pollute the water.

Similarly, you will also be saving groundwater which is a limited resource.

9. Volunteer to Keep Your Environment Clean

Since you are reading this article, it means you are concerned about your environment and want to see cleaner and better water without pollution. Why not do something about it?

You should volunteer and make the team from your social circle and friends. You can ask them to take some time out of their schedules and clean the water systems surrounding your area.

This will be a healthy activity for the environment, water dwellers, and you.

More than 70% of the surface water is used in agriculture. It can be raising livestock or cultivating crops. Unfortunately, the same agriculture, which is vital for the life on the planet, is the primary cause of water pollution.

Farmers use pesticides and other sprays to get more crops and kill bacteria and insects. The same chemicals are mixed in the water and seep into Earth, causing the groundwater to contaminate.

Furthermore, in the case of rainfall, the stormwater takes these harmful chemicals and throws them into rivers and oceans. They are ultimately killing billions of life forms.

The only solution to water pollution concerning this is to tackle this problem is to adopt green agriculture.

Water pollution starts from the small irresponsibilities of humankind. You must understand now what causes water pollution and how it affects various sectors of life on the planet. After reading through this article, you must also have a general idea of the immediate solutions to prevent it.

The sudden increase in water pollution came after the second industrial revolution when mass production began. Today you can see Islands of plastic garbage in oceans.

Humans depend greatly on plants and animals to survive, and water pollution affects them both.  If this irresponsibility continues, there may come a time when it will be too late to do something about it.

Sooner or later, we will have to recognise that the Earth has rights, too, to live without pollution. What mankind must know is that human beings cannot live without Mother Earth, but the planet can live without humans. – Evo Morales

A single person or organization does not cause water pollution. It is a collective crime of the whole of humanity. Also, it is a collaborative offense of your society and their negligence towards the environment. Similarly, a joint effort to clean the water systems in your area is expected of you and your community.

Ultimately, the final solution to water pollution is to develop environmentally-friendly thinking. Also, spreading that positive mindset among your colleagues and friends might turn water bodies in your area into a haven for plants and animals.

Make Sure to Read: Essay on Air Pollution in English for Everyone

Thank You! for being with us till the last. We respect your time and really appreciate it. We would be happy to listen to your feedback and opinions regarding this article essay on water pollution.

Air Pollution Effects on the Environment

Top 12 Most Polluted Countries in the World